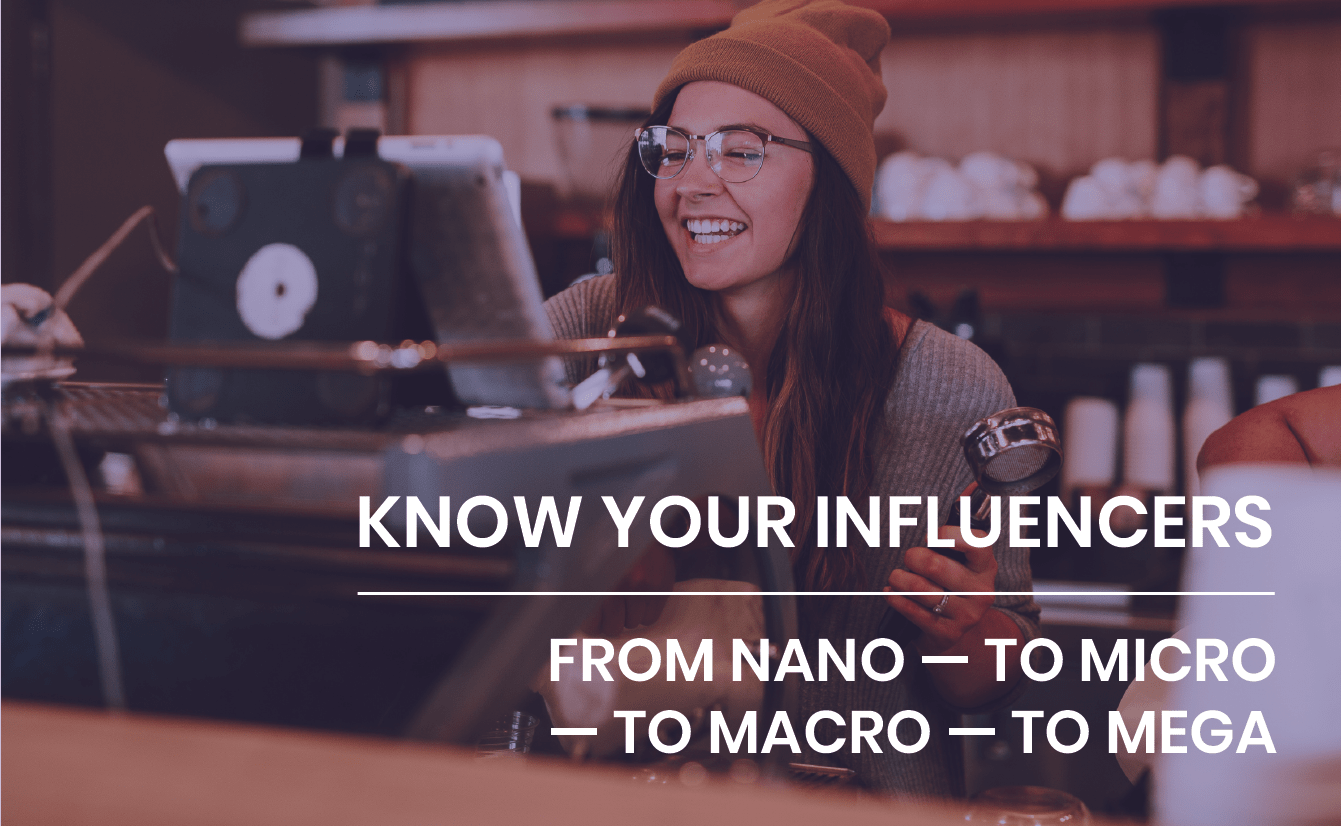 Previously on this blog, we have explored the definition of a micro-influencer; those internet-borne opinion makers and shakers with a following anywhere from the tune of 1,000 up to 50,000.

As the influencer market takes recognisable shape, four distinct categories of influencer can be determined. The differences between the influencer categories are more nuanced than may be measured by follower count alone. Let’s delve deeper into each category to explore their relative impact on marketing activity.

Nano-Influencers: Famous for not being famous

The nano-influencer is relatively new on the influencer block. Typically, these influencers have somewhere up to 1,000 followers, who tend to be from their local community. An obvious plus point of the nano-influencer is their inherent credibility. They are the digital world’s common people: regular, everyday folk speaking to other regular folk with whom they have a real-life relationship. Think your friendly hipster barista, the community physiotherapist or digital-savvy pastor.

What they lack in reach, they make up for in intimacy, driving the highest levels of engagement. Add to the mix their low charge per post — nano-influencers are generally happy to be paid in products — and cost-per-engagement rates are highly alluring. An obvious use of nano-influencers would be for local businesses looking to get a product or service in front of a targeted audience.

Lowest investment paired with competitive engagement rates: will nano-influencers become the go-to solution of choice? If only it were so simple. The main drawback of working with nano-influencers is the limited audience size, which would rule out any ambitious campaign. And while initial costs seem low, were brands to calculate investment in nano-influencer marketing to achieve the same reach over time as with micro/macro-influencers, they would be looking at similar outlays.

While reaching larger numbers than their nano-peers, micro-influencers retain specialist status on their particular industry or niche. They are perceived as thought leaders in their chosen subject matter, meaning that their posts carry weight and credibility. An added advantage of micro-influencers from a marketing purposes perspective is that their audience is often very uniform.

With a micro-influencer, brands can be confident not only of who their message will reach, but also that it will be well-received. This targeted audience makes finding the right micro-influencer to work with a logical process. The YouTuber who achieved influencer status posting make-up tutorials makes a sensible choice of partner for cosmetics brands. A travel agency or hotel resort brand, meanwhile, will want to reach out to the successful travel vlogger.

In terms of cost, while micro-influencers charge less than macro-influencers, they can still request a hefty fee. It’s advisable to invest time in initial research as to which micro-influencer will provide the highest engagement. Another option is to consider partnering with a specialist agency who can conduct this research for you and also ensure the best deal.

To distinguish between the two, macro-influencers are those notching up a follower count of somewhere between 100,000 and 500,000 followers. Then there are your mega-influencers, also coined ‘superstars’ in the field, with a substantially larger following. Celebrity/mega-influencers come at a very high cost. As of December 2018, Kylie Jenner could charge $1 million for a sponsored social media post without batting a well-made up eyelid, according to Hopper HQ’s Instagram Rich List. The mega-influencer’s status as a living brand ensures that they are well-versed in working with companies on influencer campaigns.

But what mega-influencers guarantee in eyeballs, they lack in terms of converting power. Their colossal audience is simply too diverse and differentiated to guarantee conversions, making these superstars more useful for top-of-funnel marketing activity. Think of their feeds as the social version of billboards and TV ads — pure awareness activity.

Working with each type of influencer has its respective uses, advantages and pitfalls. As with every investment, what matters is deciding how to approach and measure influencer activity in the best way to achieve specific business goals.

Photo by Brooke Cagle on Unsplash